Here’s a useful little tool for you administrators out there, SpecOps GPupdate, a handy utility which adds extensions when right clicking on objects within Active Directory.

Normally when I install this there are a few perquisites that need to be installed and no other issues. However on this occasion when installing on a Windows server 2008 R2 machine I received the following when trying to do a gpupdate on a pc: 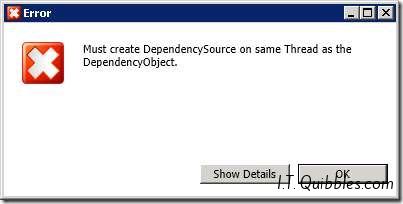 Hmm ok, had a look around the config files located in c:\Program Files\Specopssoft\Specops Gpupdate\Specopssoft.Adx.UI.exe.config and with some help from their forums I found that two of the lines are the wrong way around:

Save the file and try running the gpupdate on the remote pc, Voilà! and now all is working.
Hope this helps you out of a sticky Quibble.