I got a call the other day saying that a particular mailbox was having some strange problems, disconnecting etc, however I knew that this was particularly large (25Gb) and is also shared.

Jumping into good old ‘eventvwr’ I saw and saw this error dotted about:
Error:  MSExchangeIS EventID 9646: Mapi session exceeded the maximum of 500 objects of type “objtFolder”

This is cause by having over 500 folders in Outlook. Rather that asking the user to remove some folders and sub-folders (which I knoew wouldn’t happen) I decided to look into it further and found that an effect of this is that Outlook folders don’t update properly and various calendar issues pop up, such as disappearing items and such. 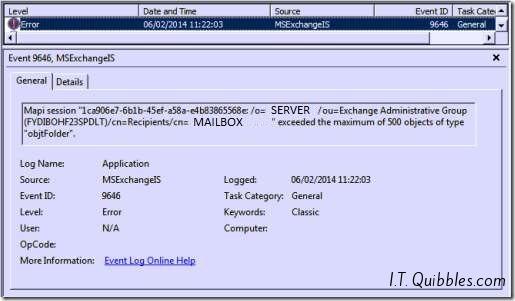 To resolve this you’ll need to make some registry changes. To open ‘regedit’ look here

The Exchange server will update after a few minutes and you shouldn’t need to restart the Information Store or any services. If you still see this error occurring in the ‘eventvwr’ then you’ll need to go back to the Registry Editor and up the value (i.e. 600) until the error stops.