Ok so I’ve done my fair share of SBS migrations in my time and there’s one thing which has been bugging me for a while and that was the massively high disk usage that comes with the SQL SBSMONITORING instance on SBS2008 and SBS2011.  It eats up disk usage like anything!

Now you ‘can’ get around this by simply disabling the SQL service (which I have been known to do), which solved the issue in the short term, but it is there for a reason and some programs require it such as backup programs in order to get a full 100% backup and so it needs to be running.

So while having a little free time I set about looking for a solution.  But first here’s a screen shot from the Resource Monitor on SBS2011 showing you the Disk Usage of the SQL instance:

As you can see the ‘Read’ column and how high the sqlservr.exe image is compared to everything else.  I know it only say’s 2 MB/sec Disk I/O but it’s the amount of Read (B/sec) which kills the disk speed, with the heads constantly jittering about reading data.

(This particular sqlservr does relate to the SBSMONITORING instance, if you hover your mouse over it’ll expand and show you the name.)

Basically the Database needs to be rebuilt, and luckily enough there is a nice little script to do this which you can find here:
Create-SBSMonitoringDb

Once you’ve downloaded this expand the contents extract the files to a ‘temp location’ then following the steps below depending on your Server edition:

NOTE: For this script to run without error you’ll need to stop the SQL Server (SBSMONITORING) and Windows SBS Manager Services.  Or you can open up the Create-SBSMonitoringDb.ps1 script and add –force to the following lines as per below:

NOTE 2: You may need to unblock the script to enable it to be run. if you need to do this, open the properties of the Create-SBSMonitoringDb.ps1 file and click unblock at the bottom: 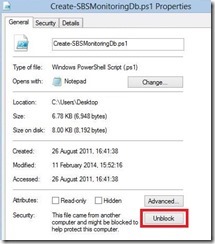 So you can see the result above, 1 Row affected and everything looks good, the SQL Service and the Windows SBS Manager services have started.

Give it about 20-30 Minutes for the server to get settled and everything should be looking a lot better and faster:

I hope this gets you out of a sticky Quibble.